posted by admin on January 21, 2021 in News, Police Misconduct

UC Santa Cruz graduate student Sabrina Shirazi has filed a federal civil rights lawsuit against University of California Police officials alleging that officers clubbed her repeatedly on the head and body during a February 10, 2020, labor picket, causing a concussion and other serious injuries. The lawsuit is being served on the UCPD defendants this week.

Sabrina Shirazi joined hundreds of other UCSC students, faculty and staff in a peaceful picket at the University entrance on February 10, 2020, to call attention to grad students’ demand for a Cost of Living Adjustment (COLA), to afford basic necessities such as housing. 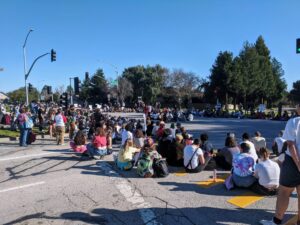 “I was simply standing in the crowd, when without warning, several campus police officers rushed from behind, aggressively shoved me, and beat me repeatedly with clubs on my head and across my body,” said Ms. Shirazi. “I was not impeding the police, and they were not trying to arrest me. Officers surrounded and blocked my ability to leave, while hitting me. The officers’ blows caused a concussion as well as sprains and strains across my body; I spent the next month in bed, unable to even sit upright. I have lived with physical and emotional pain every day since then. I still don’t have the strength to get through a full day of normal activity. Several times, I questioned whether I could complete my Ph.D.” 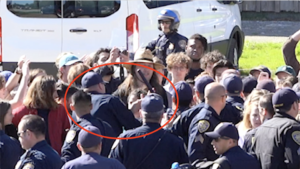 “The officers’ actions were illegal. Ms. Shirazi never presented a threat to these armed officers or engaged in any conduct that would justify the police in using any force on her, let alone sriking her on the head with their police clubs,” said attorney Rachel Lederman. Lederman and fellow civil rights attorney R. Michael Flynn are representing Ms. Shirazi “to hold the University police accountable and make sure they don’t continue to injure their own students, or anyone else,” commented Flynn.

“I am physically small, and any single officer could have easily moved me aside. I believe the officers likely racially targeted me for this violence, as I was the only person in my immediate vicinity with relatively dark skin and features, and the only person injured,” added Ms. Shirazi, who is of mixed Iranian and Ashkenazi Jewish background.

“This civil rights lawsuit is part of the nationwide call for justice inspired by the Black Lives Matter movement. Police departments across the country are under scrutiny for killings and brutality against Black and Brown people, and increasing reports of white supremacist racism and white power gangs amongst their ranks,” said Flynn.

The lawsuit names UCSC former police chief Nader Oweis, and Lt. Greg Flippo as defendants and is seeking the identities of the officers who struck Ms. Shirazi. Soon after the incident, her attorneys requested a list of involved personnel under the California Public Records Act, but the University has withheld the information. The civil rights lawsuit seeks fair monetary compensation for Ms. Shirazi’s injuries and medical bills, and for the police officers’ violations of her constitutional rights to freedom of speech, to equal protection, and to be free from excessive force by law enforcement.

UCSC graduate student workers and their union local made a demand for a COLA in November 2019, based on the severe rent burden they were facing in Santa Cruz’ inflated housing market. In December, 2019, the graduate student workers began a grading strike, and a full teaching strike on February 10, 2020, the day of the picket where Ms. Shirazi was injured. The wildcat strike concluded with the onset of the Covid-19 pandemic. The strike achieved a partial victory in the form of a new housing stipend for graduate students, but the struggle for an adequate wage continues. A growing number of graduate students have also joined a “Cops Off Campus” campaign. 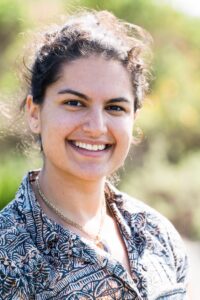 Ms. Shirazi is a 5th year PhD candidate in the UC Santa Cruz Ecology and Evolutionary Biology Department. She has been awarded the Graduate Assistance in Areas of National Need three-year fellowship and the Phi Beta Kappa Northern CA Regional Graduate Scholarship Norall award. She is the lead UCSC scientist for the California Environmental DNA program, a state-wide collaboration to survey and protect California’s biodiversity.