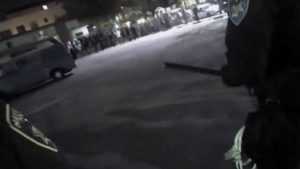 Today, in litigation brought by the National Lawyers Guild, San Francisco Bay Area Chapter (“NLGSF”), the California Supreme Court decided that public agencies may not charge the public for the cost of redacting electronic records under the California Public Records Act (“CPRA”). The decision in National Lawyers Guild v. City of Hayward, S252445, covers the wide array of public records that are kept in electronic formats.

In January 2015, NLGSF requested police body camera videos and other records from the Hayward police department related to its activities at a December 2014 Black Lives Matter demonstration in Berkeley, when Hayward officers shot a Black demonstrator with “less lethal” munitions. Hayward eventually turned over the videos, which revealed HPD officers shooting at peaceful protesters while making remarks such as, “They are f—-ing animals”; “I got it up right now ready to go mother—-ers” and “Get a shot in his f—-ing ass”. To obtain the videos, however, Hayward charged NLGSF $3,247.47 for the cost of editing the videos to redact supposed protected information.

The CPRA does not generally allow agencies to charge a fee to redact records, but Hayward argued that Cal. Gov. Code § 6253.9 did permit it to charge fees this for electronic records where “data compilation, extraction, or programming” was required. NLGSF, represented by the ACLU and attorney Amitai Schwartz, challenged the fees in the Superior Court and prevailed.

Hayward appealed the Alameda County Superior Court decision. The First District Court of Appeal found that, while an agency cannot charge to redact paper records, § 6253.9 does allow an agency to charge a requester for its redaction of electronic records in some circumstances. In the wake of the appellate decision, agencies across the state claimed the right to withhold public emails and other electronic records unless requestors could pay hundreds or thousands of dollars in redaction fees. The Supreme Court disagreed, holding that “Just as agencies cannot recover the costs of searching through a filing cabinet for paper records, they cannot recover comparable costs for electronic records. Nor, for similar reasons, does “extraction” cover the cost of redacting exempt data from otherwise producible electronic records.” The Court reasoned that what Hayward’s staff did to edit the videos “was not substantively different from using an electronic tool to draw black boxes over exempt material contained in a document in electronic format.”

“Today’s California Supreme Court decision is an important victory for government transparency in California,” said Rachel Lederman, the civil rights attorney who requested the videos on behalf of NLGSF. “As we see from the police killing of George Floyd just this week, and so many others, police racist violence is as much of an issue today as it was in 2014. Body cameras can’t fully serve their function of promoting police accountability if it is prohibitively expensive for the public to access the videos.”

“What was at stake here is the public’s right to know what its government is doing, including what its police are doing on the streets. The Public Records Act is designed to provide access to these records. Since almost all records are now kept in electronic form, permitting government to charge for redactions would have gutted the intent of the Public Records Act and closed off many electronic records to public scrutiny,” said Amitai Schwartz, the attorney who litigated the case and argued it in the Supreme Court.